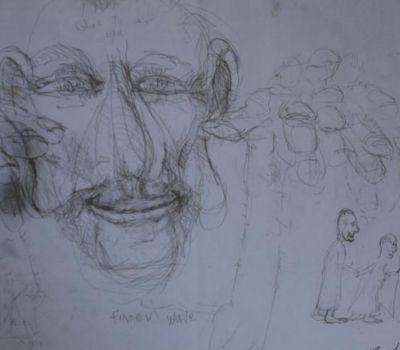 Originally formally trained as a painter, McCarthy's main interest lies in everyday activities and the mess created by them. [2]  Much of his work in the late 1960s, such as Mountain Bowling (1969) and Hold an Apple in Your Armpit (1970), are similar to the work of Happenings founder Allan Kaprow, with whom McCarthy had a professional relationship.
Boxhead (2001), Collection of the Centro de Arte Contemporânea
Inhotim in  Brumadinho /Brazil
Santa Claus (2001) on the Eendrachtsplein in Rotterdam, the Netherlands McCarthy's works include performance, installation, film and "painting as action. His points of reference are rooted, on the one hand, in things typically American, such as Disneyland, B-Movies, Soap Operas and Comics – he is a critical analyst of the mass media and consumer-driven American society and its hypocrisy, double standards and repression. On the other
hand, it is European avant-garde art that has had the most influence on his artistic form language. Such influences include the Lost Art Movement, Joseph Beuys, Sigmund Freud, Samuel Beckett, and the Viennese Actionism.