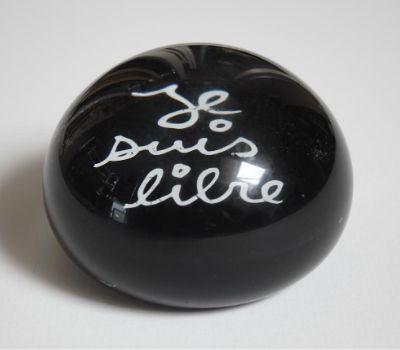 Ben Vautier lives and works in Nice, where he ran a record shop called Magazin between 1958 and 1973. He discovered Yves Klein and the Nouveau Réalisme in the 1950s, but he became quickly interested in the French dada artist Marcel Duchamp, the music of John Cage and joined
the Fluxus artistic movement in October 1962. In 1959, Vautier founded the journal Ben Dieu. [1]  In 1960, he had his first one-man show, Rien et tout in Laboratoire 32.

He is also active in Mail-Art and is mostly known for his text-based paintings or « écritures » begun in 1953 with his work & Il faut manger. Il faut dormir. Another example of the latter is L'art est inutile. Rentrez chez vous" (Art is Useless, Go Home). A notable work made for Harald Szeemann's  Documenta  5 exhibition in 1972 shouts “KUNST IST ÜBERFLÜSSIG” - or “Art is Superfluous”, and was installed across
the top of the  Fridericianum  museum in Kassel.

He has long defended the rights of minorities in all countries, and he has been influenced by the theories of François Fontan about ethnism. For example, he has defended the Occitan language (southern France). In 1981 he coined the name of the French art movement of the 1980s Figuration
Libre (Free figuration).