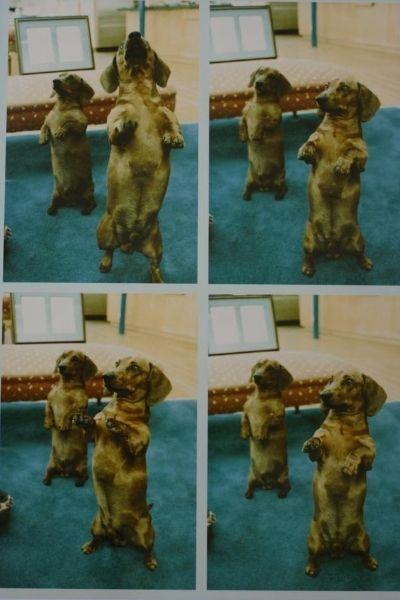 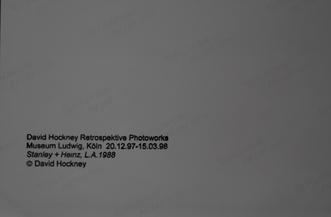 David Hockney,  (born 9 July 1937) is an English painter, draftsman, printmaker, stage designer, and photographer. As an important contributor to the pop art movement of the 1960s, he is considered one of the most influential British artists of the 20th century.

As a great dog lover David Hockney liked to paint and also to photograph his two Dachshund „friends“ Stanley and Heinz. This photograph was published in a small edition by Museum Ludwig, Köln on the occasion of the exhibition „David Hockney Retrospective Photoworks“ in 1997.

PreviousNext
Overview
Cookie preferences
This website uses cookies. A cookie is a simple small text file that is stored by your browser on your computer's hard disk, telephone or tablet when you visit the website for the first time. The information in these files is used for statistical purposes and in an anonymous way to make the website work, or to help analyse thewebsite to improve our services. Because we respect your right to privacy, you can choose not to allow some types of cookies (click on the different category headings below to find out more and change our default settings). However, blocking some types of cookies may impact your experience with the site and the services we are able to offer
Only accept strict cookies
Save preferences
We use cookies save your preferences, provide social media features and analyze traffic. We also share information about your use of our site with our social media and analytics partners.
Change preferences
Accept all cookies